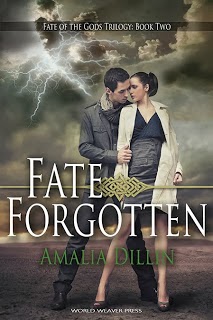 
Before I get to my review, I want to clear things up from the start and say that I am #TeamAdam all the way—


It’s true! Adam was a complete jerk in book 1 and I never imagined I would see him as anything but a bucket of newspaper shavings ready to line a parakeet cage. The fact that I changed my opinion of him is a tribute to the author's immense talent. Thor was so awesome and Adam was so mean, there wasn’t even a contest in my mind, especially since the way Adam treated Eve in some of their lives was unforgiveable. Yet, here I am, definitely on Adam’s side. How did this happen? Let’s get to the review and find out.


FATE FORGOTTEN picks up where FORGED BY FATE left off. For those of you unfamiliar with the Fate of the Gods series, it’s based on a world in which all of the myths are true. Gods walk the Earth among mortals. At the center of it all is the creator of Earth itself, mysteriously absent, who fashioned Adam and Eve to be born and live out mortal lives, to grow old and die, only to be reborn again and again throughout eternity. They keep their memories (well… sort of, but no spoilers!!) and they are connected in a fundamental way that makes them SEEM destined to find each other and live out their ongoing reincarnations together.


Except, in the Garden of Eden of for centuries thereafter, Adam was rude, dominating, and power hungry. He saw Eve as a possession and a means to an end. With their vast knowledge and their abilities to manipulate human emotions, they could rule the world, bwahahaha! So Eve, being made of love and goodness, she basically flees from him and spends her lives doing what she can to spread compassion, hope, and love. Book 1 is so much more than that, but for review purposes, that should be enough to get you up to speed if you haven’t read it yet. Annnnd, if that’s the case, let me take this opportunity to pimp FORGED BY FATE! Read this book! Honestly you will not regret spending an afternoon in Amalia Dillin’s incredibly well thought-out, exceptionally crafted world.


In FATE FORGOTTEN you will see even more godly action. There are appearances by Egyptian and Greek gods, and most especially by Thor’s peeps from Asgard. The author has a captivating way of incorporating thousands of years of historical-based mythology into her stories that’s thoroughly fascinating. The world and characters are fully realized, and you lose yourself in the story from the very first page.


The main story revolves around Adam, Eve, and Thor, with Loki making a mess of things whenever possible. Adam wants Eve and world domination; Eve, Thor, and the rest of the godly crew are out to stop this from happening. By any means necessary… and gods don’t really play fair.


Wow, this is a well-written story. No plot holes, no confusion despite the millennia-spanning storyline, and best of all, characters that leapt from the page. The author achieved an epic victory in character development. Without spoiling anything, I can say that FATE FORGOTTEN is where things began to shift for me as far as Adam is concerned. Saying that I did *not* like him initially is an understatement, but by the end of the book? Adam had snuck his way into my heart. Through external and internal driving forces, the author masterfully enabled Adam to believably shift from a brutish manipulator to a compelling, fleshed-out antihero with a beating heart underneath that villainous, I-must-rule-the-world-with-Eve-as-my-queen exterior. I give Amalia Dillin a STANDING OVATION for her immense talent in character development.


This book has so many things I love: mythology, romance, adventure, superpowered heroes, and compelling characters that feel authentic in a world that feels so real I can’t help but wonder if gods and goddesses really do slip through life with the rest of us. I whole-heartedly recommend this book. Do read! And once you do, you will be on the edge of your seat waiting for the final novel in the trilogy to come out! Click on the links below to pick up a copy of FATE FORGOTTEN on Amazon or Barnes & Noble:
FATE FORGOTTEN on Amazon
FATE FORGOTTEN on Barnes & Noble
Thanks for stopping by my blog. Happy reading!
~Di
Written by Unknown at 3:42 PM 4 comments:

So much news for one blog post! I'll start with what matters MOST: Amalia Dillin's newest book, FATE FORGOTTEN (book 2 in the Fate of the Gods series) is AVAILABLE NOW, AhAhAhAhAh!!!! ~muppet flail~

I have signed up to participate in Amalia's #ThorLove Blog Hop, going on now through November 8th!

I'm making my entry short and sweet, because there are things that must be done in this blog post!! But I do have a contribution I am proud of, in PHOTO FORM...

Without further ado, here is my contribution to the Thor-In-Pop-Culture LoveFest!!

My Very Favorite Thor In Pop Culture Is... 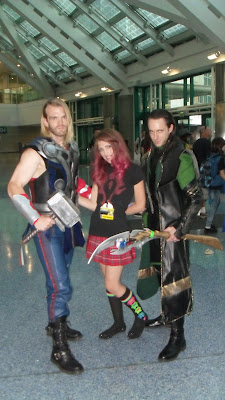 And here they are!

While I was at Comikaze 2013 last weekend, I got to meet Thor and Loki--well, they COULD have been, so awesome were their cosplays. I have loads of pictures, and I will add some to the blog after Amalia's release day excitement has settled down, but for now we have a picture of THOR GOODNESS.

When I saw these two, I knew there could be no better way to honor Amalia and her amazing books than to share that during her #ThorLove blog hop.

And now... onto some other epic news of epicness! But first, have you read book 1, FORGED BY FATE??? You have NOT?! Well then, today is your lucky day!! I happen to have a paperback copy FOR YOU. Yes! FREE!

In FURTHER honor of FATE FORGOTTEN's release, I am hosting a giveaway! The paperback giveaway is open to anyone in the U.S. or Canada (international contestants, feel free to enter for an e-book!!). Sign up with the Rafflecopter below to enter!

If you're already a fan of Amalia's series and you haven't gotten your copy of FATE FORGOTTEN, what are you waiting for? Ohhh, need the links to buy? Here they are, along with some more info on this awesome story:

Since the gods returned Adam's memory six hundred years ago, Thor has been a scourge on
his lives. But when Adam learns that Thor has been haunting his steps out of love for Eve, he is determined to banish the thunder god once and for all. Adam is no fool: Eve still loves the man she knew as Thorgrim, and if she ever learned he still lived, that he still loved her, Adam would lose any chance of winning Eve to his side, never mind liberating the world. But after everything Thor has done to protect Eve, everything he's sacrificed, the thunder god won't go without a fight. Not as long as Eve might love him again.


Thanks for supporting Amalia, who is made of awesome...
Read her books! You will be so happy you did because they are amazing!
a Rafflecopter giveaway