I love cover reveals... and never more so than when the book was written by a very dear friend. I'm so proud and excited to show off the cover of book 2 of the Fate of the Gods series: FATE FORGOTTEN by Amalia Dillin, set to release on November 5th!! 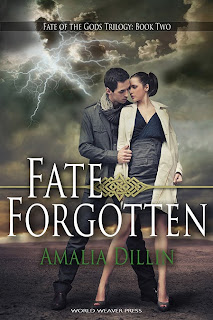 All The Links:﻿
Add FATE FORGOTTEN to Goodreads (just click here!) and if you haven't picked up book 1 in the series, doooo eeeeeeet! FORGED BY FATE is available now, right here on Amazon, and wherever fine books are sold! FYI, Amalia writes phenomenal stories you think about long after you've finished reading... and believe me, you will fall in love. Don't forget to visit her blog, Good To Begin Well, Better To End Well.

Want to know a little more about FATE FORGOTTEN? Check out the cover copy below!

Since the gods returned Adam's memory six hundred years ago, Thor has been a scourge on his lives. But when Adam learns that Thor has been haunting his steps out of love for Eve, he is determined to banish the thunder god once and for all. Adam is no fool: Eve still loves the man she knew as Thorgrim, and if she ever learned he still lived, that he still loved her, Adam would lose any chance of winning Eve to his side, never mind liberating the world. But after everything Thor has done to protect Eve, everything he's sacrificed, the thunder god won't go without a fight. Not as long as Eve might love him again.

Today I'm pleased to present a guest post by the esteemed Amalia Dillin- check out her blog at Good To Begin Well, Better To End Well, and don't forget to buy her latest book, TEMPTING FATE, available now... but first, read her post! It's filled with all kinds of Adam goodness!! (In case you can't tell, Adam is my favorite... anti-hero, all the way!)
The Antagonist’s Perspective
by Amalia Dillin
In Forged by Fate, Adam is, no question, an antagonist in Eve’s life. He’s the villain at Creation, and Eve is rightly suspicious of him even in the present day. But in TEMPTING FATE, we see a different side of the story. Adam’s side.
Oh, Adam still wants the world in the palm of his hand, of course. He believes himself a god among men, and he still needs Eve to make that dream reality. But as a man in the modern world, with his memory intact, Adam has begun to learn patience. After all, he’s already waited a millennia for Eve, what’s another century? And like Mia, Adam isn’t adverse to having a little fun in the meantime.
They really aren’t so dissimilar, Mia and Adam. They both want to rule their own lives. They’re both a little bit self-centered, a little bit self-involved, even selfish when it comes to getting what they want. Adam’s scope is just a little bit bigger; he wants to rule the world, too. It’s kind of fitting, really, that when they did cross paths, they’d be drawn to one another. But not for the reasons you’d think. Not for the wholly selfish reasons.
Adam sees in Mia a reflection of his own struggles for independence. On a smaller scale, perhaps, but still not so different. Mia has lived her life under her sister’s thumb, even if Eve never realized it, just as Adam himself has lived by the rules of the gods he so resents. It’s only natural, then, that he might be interested in freeing her – most especially when he can do so little to free himself.
There are times when Adam is unquestionably my favorite character, and I hope that in TEMPTING FATE and FATE FORGOTTEN, he might begin to become yours, too! 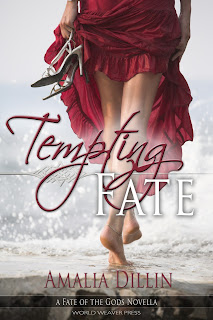 Buy TEMPTING FATE, available now! CLICK HERE FOR AMAZON, or if you prefer, BUY IT HERE AT BARNES & NOBLE... and don't forget to CLICK HERE TO ADD IT ON GOODREADS!
~ ~ ~
More about TEMPTING FATE:﻿
Mia's lived in her sister's shadow long enough. Now that Abby is getting married to a Frenchman, Mia scents freedom. In fact, Jean DeLeon, the groom's too-charming cousin, seems like the perfect place to start. But the House of Lions is full of secrets, and what started out as an exciting fling is quickly becoming more frustration than fun. Mia wants answers, or she wants out, and it isn't like she doesn’t have other options. Ethan Hastings, for example. Tall, handsome, and gray eyes like nothing she's ever seen before.

The fact that Jean seems to hate him is just a bonus.
Tempting Fate takes place during Forged by Fate, and follows Mia, Eve's younger sister in the present day, as she does what she does best -- cause trouble!

More about Amalia!
Amalia Dillin began as a Biology major before taking Latin and falling in love with old heroes and older gods. After that, she couldn't stop writing about them, with the occasional break for more contemporary subjects. She lives in upstate New York with her husband, and dreams of the day when she will own goats--to pull her chariot through the sky, of course.
~ ~ ~
You're still here? Go on and buy Amalia's book!! :)﻿
Written by Unknown at 9:23 PM 3 comments:

Email ThisBlogThis!Share to TwitterShare to FacebookShare to Pinterest
This was mostly about: book talk, writing

TEMPTING FATE by Amalia Dillin, Plus a GIVEAWAY!

Guys... GUYS!! My dear, sweet, wonderful critique partner (who happens to be one of my closest friends--NOT that I'm biased!) has a BOOK BIRTHDAY!!! Please take a moment to buy and devour her latest, TEMPTING FATE...

Buy it HERE
Add it to Goodreads HERE﻿ 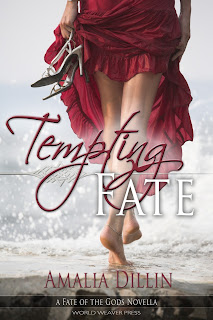 Mia's lived in her sister's shadow long enough. Now that Abby is getting married to a Frenchman, Mia scents freedom. In fact, Jean DeLeon, the groom's too-charming cousin, seems like the perfect place to start. But the House of Lions is full of secrets, and what started out as an exciting fling is quickly becoming more frustration than fun. Mia wants answers, or she wants out, and it isn't like she doesn’t have other options. Ethan Hastings, for example. Tall, handsome, and gray eyes like nothing she's ever seen before.

The fact that Jean seems to hate him is just a bonus.


Tempting Fate takes place during Forged by Fate, and follows Mia, Eve's younger sister in the present day, as she does what she does best -- cause trouble!
This book is fun and fabulous, you will adore it!!
But WAIT, there's MORE! A giveaway!
Head on over to Amalia's blog and enter to win all kinds of goodies, including a $15 Amazon gift card! Who doesn't want a free $15 present?? Go on, shoo! Hurry and enter before the giveaway ends!
* * * CLICK HERE TO ENTER * * *
Written by Unknown at 2:42 PM 4 comments:

Email ThisBlogThis!Share to TwitterShare to FacebookShare to Pinterest
This was mostly about: book talk, favorites

People never change. Or people do, depending on which quote I read. Some things don’t change… but some change is inevitable. People grow older. They get new jobs. Children enter new phases and eventually find their own way in life. Yet, as different as the world is now from a century ago, babies still come into the world in much the same way as they ever did. Waves still ebb and crash as they ever have.

And here I am, pensive and... at peace, I guess... as I ride the crest of the changes I’ve brought about in my own life. There have been a lot of them over the past few months. A lot. I keep my personal life… well, personal, so I won’t go into details, but it’s enough to say that these changes have led to a big move from the desert back to Los Angeles. A move that involves me, and half the time, my kids. Their dad is making positive changes of his own, too, and those involve being a part of the kids’ life just as much as I am. The kids are what matter most to both of us.

Speaking of the munchkins, they love being “city kids” as they’ve dubbed themselves. They like seeing the city’s twinkling lights from my balcony. They like the cool days and chilly nights. They like how happy mommy and daddy are lately. They're excited to be starting at a new school. It seems like these changes are positive for them, too.

As for me, I’m closer to my family now, which is good. I like that it’s easy to get to the beach now, to museums, and to hundred-year old parks with gnarled up trees that are great for climbing. I don’t need a car to do most of the things I want to do every day. Life in general is walkable and simple. And pretty.

I’ve learned that even if I fight against change, it’s a losing a battle. I’m not the same person I was when I was a teenager, any more than I’m the same person I was when I was a little girl. I don’t regret the choices I made as either a girl or a teenager, and I hope in the decades to come, I can say the same thing about the choices I’m making now. At least... now that the dust has settled, I can say I’ve been happy since my move. Happy on the inside. Considering life’s uncertainties, that much is enough for me.
Written by Unknown at 10:40 PM 6 comments: